For the past years I worked at SCABAL, a London based education specialist architecture practice where I have mostly been in-charged of all the workshops with schools, as well as some of the creative design stages.  SCABAL has copyright © for all photographs and drawings.

[ St. Elizabeth School House & Playgrounds ] is a 2Form entry Catholic Primary School in Bethnal Green. It is located in an area of London where there is a high mix of lower and middle class families, but the school is remarkably well known for its high educational standards and liberal approach to education, having, as a consequence, a fairly strict catchment area.

SCABAL has been commissioned to develop three distinct projects for the school with equally distinct budgets and time frames. The School House is a timber frame 140m2 after school club with an open plan for the children to run around and a beautiful giant timber block toy in the middle containing all the necessary educational facilities. 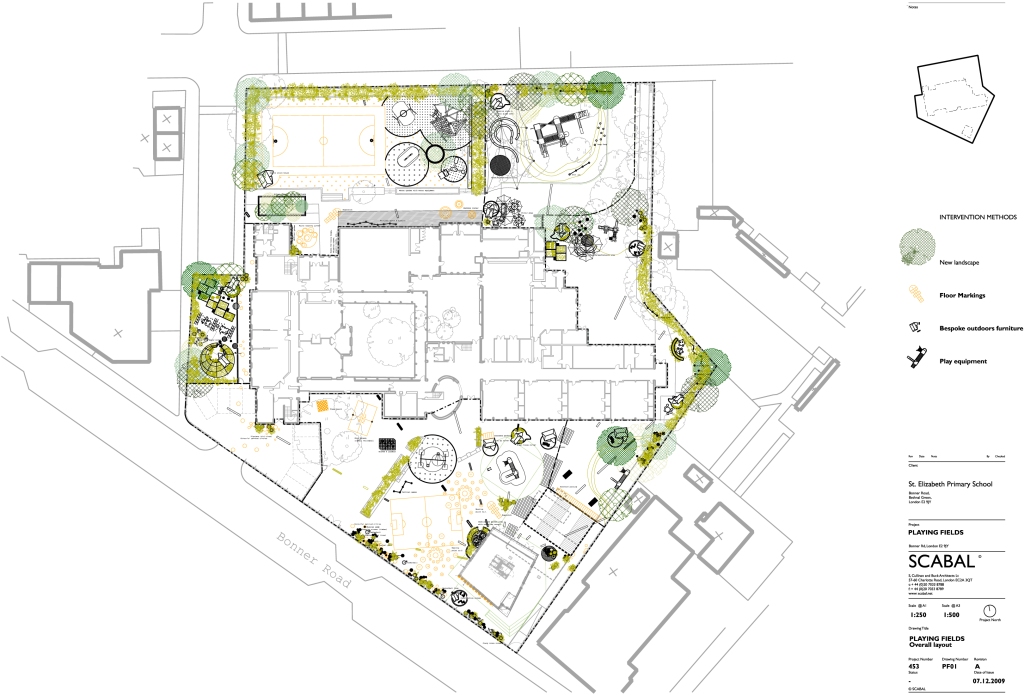 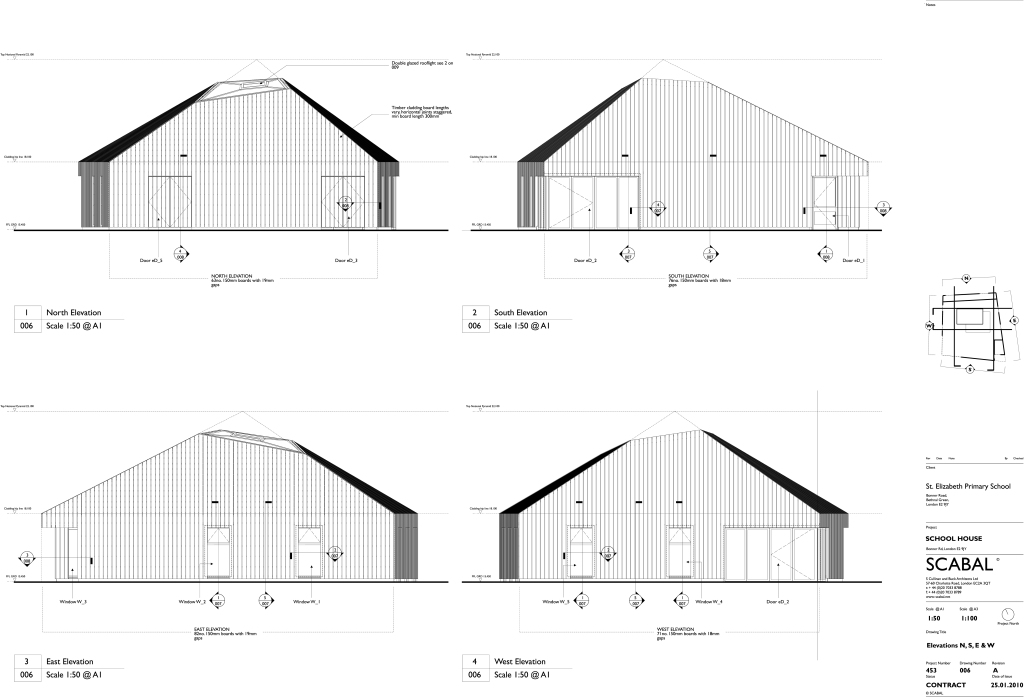 [ Learning Promenade ] is an intermediary BSF project for Bishop Thomas Grant Secondary School in Lambeth.
SCABAL was commissioned to design a Learning Resources Centre, within a £100k budget, for the school’s new 6th. A design that, although potentially temporary, should be flexible enough to accommodate future uses, once a permanent 6th form LRC is built. The Learning Promenade retains most of the existing qualities of the room such as its generous amount of natural light, open plan and its long rectangular shape. A 23m long bookshelf made of 20 different colourful units resembling the differences is heights, shapes and development of secondary school pupils, defines an axis between larger and smaller spaces. Flower pots inhabit the top of the book cabinets, contributing to the intention of bringing natural colours and smells inside the room. As if pulled from the cabinets, vertical screens with pictures chosen by the pupils (which identify different learning environments) start defining smaller, more intimate, learning spaces where different types of furniture promote different types of learning.

[ Tides and Times ]  is a project set up as a partnership between the BBC and the RIBA. 20 Primary Schools, located within a mile radius from the Thames, were encouraged to unravel the history and the impact of 20 landmarks along the river. 3 pods were designed to host the contents of the children’s findings and attract visitors to the embankment.

SCABAL was one of the chosen practices working with St. Edmunds Catholic Primary Schoolin the Isle of Dogs. SCABAL re-created the idea of ‘the knowledge’ by taking the visitors from one venue to the other, on an imaginative journey through the embankment written and performed by our school children. 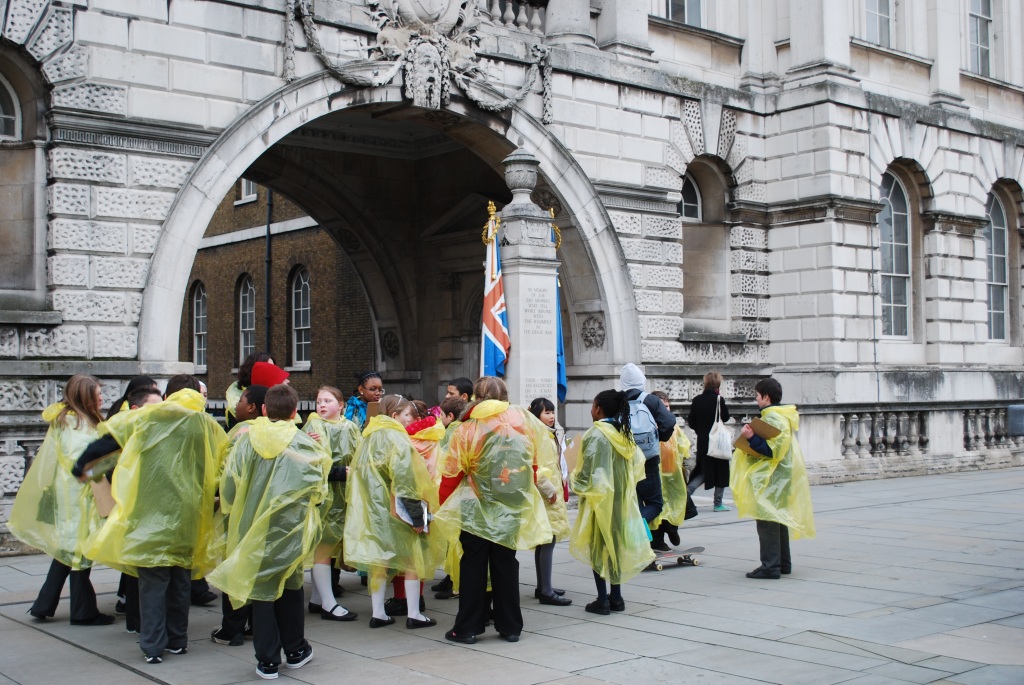 [ Camden BSF ]  Swiss Cottage Special School ( soon to become the New Swiss Cottage Special School, once it merges with Jack Taylor School) along with UCL’s Academy are two of the BSF Phase 1 chosen schools that should re-define the concept of Secondary and All Round Schools. As CDAs, SCABAL along with the schools, PfS representatives, Local Authority and many other consultants have been trying to give shape to the needs and wills of the two schools, both by listening to their experience and knowledge, and by seeking advise from former pupils, teachers and other staff, to create a brief that will bring the two entities together on a single site, where a mainstream school and a SEN will be linked by a visionary take on the transformation of education. Through research and dialogue, the conventional role of the pupil and teacher, the nomenclature of the different rooms and the special layout of existing schools are questioned a visually diagrammatic brief emerged. 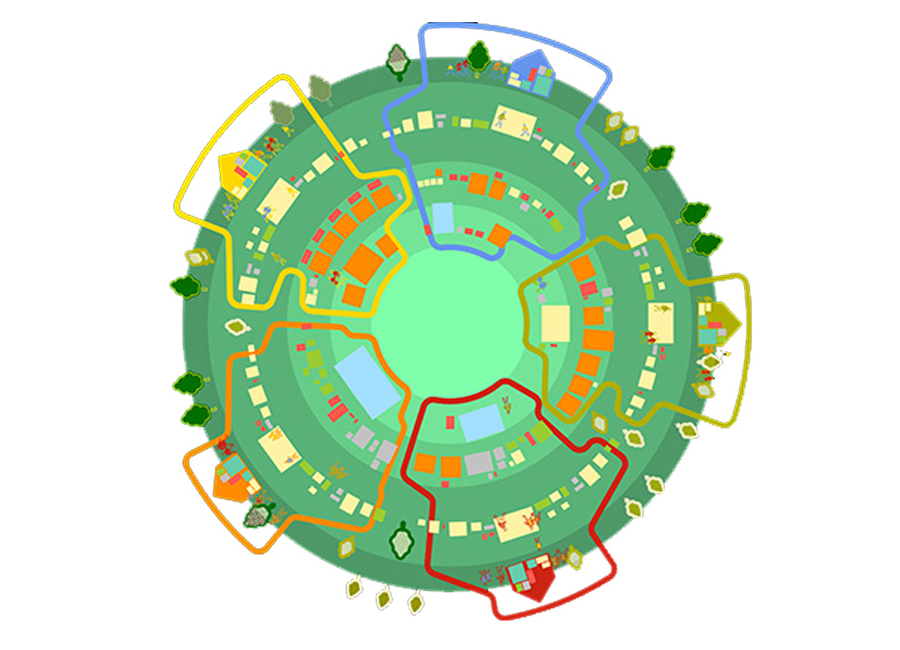 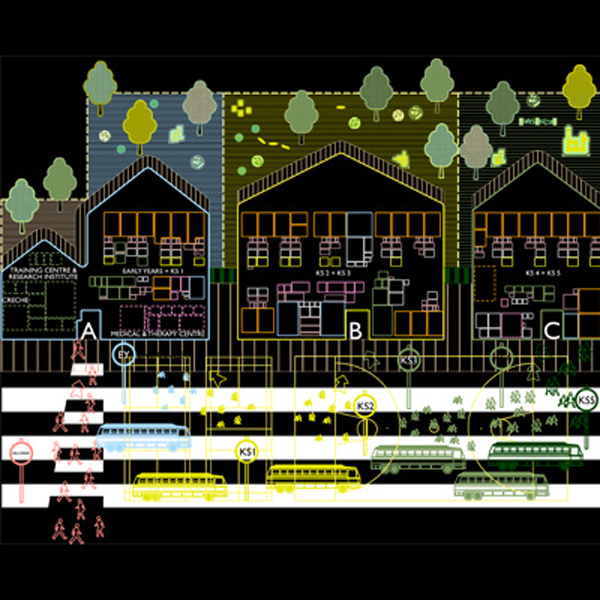 [ Dunraven Sports Hall ] SCABAL, with Urban Space Management (USM) and The Furness Partnership, have designed an innovative Sports Hall for Dunraven School, a large Secondary School in the London Borough of Lambeth, that is based on a unique, affordable and sustainable new method of construction. Using sea containers to create the building’s envelope, SCABAL is providing a Sports Hall and multi-purpose Community facility.

The building includes galleries, at first floor level, that overlook the hall on three sides. This novel approach, defined by using sea containers as both structure and internal accommodation, (also housing the changing rooms) allows for extremely simple and cost effective building (the total value of the project is £1,6 million), whilst capturing the excitement of sports appropriate for a school.

[ Superstudio ] design emerges from a beautiful dance hall, in Haggerston School (an Ernö Goldfinger secondary school in Hackney) where natural light coming from all four points of the compass lights up the existing space.

The design is identified as an intermediary project and a potential beacon for the re-design of Haggerston as part of the BSF scheme carried forward by Avanti Architects. SCABAL used our role as Client Design Advisers to test some of the design intentions for this particular school. It is an experimental room that aims to revise the learning methods that have so far been applied.

[ Eco-House ] is a small (100m2) house designed to fit on the garden of 70 Canonbury Park South, Islington. The clients envision renting out their existing terraced house and re-locating to a new two storey house where they plan to embrace the benefits of a new ‘eco lifestyle’.

The budget, similarly to the most of the house components, is modest. £200k might be merely sufficient to accommodate some of the eco-principles that they would like to adopt. 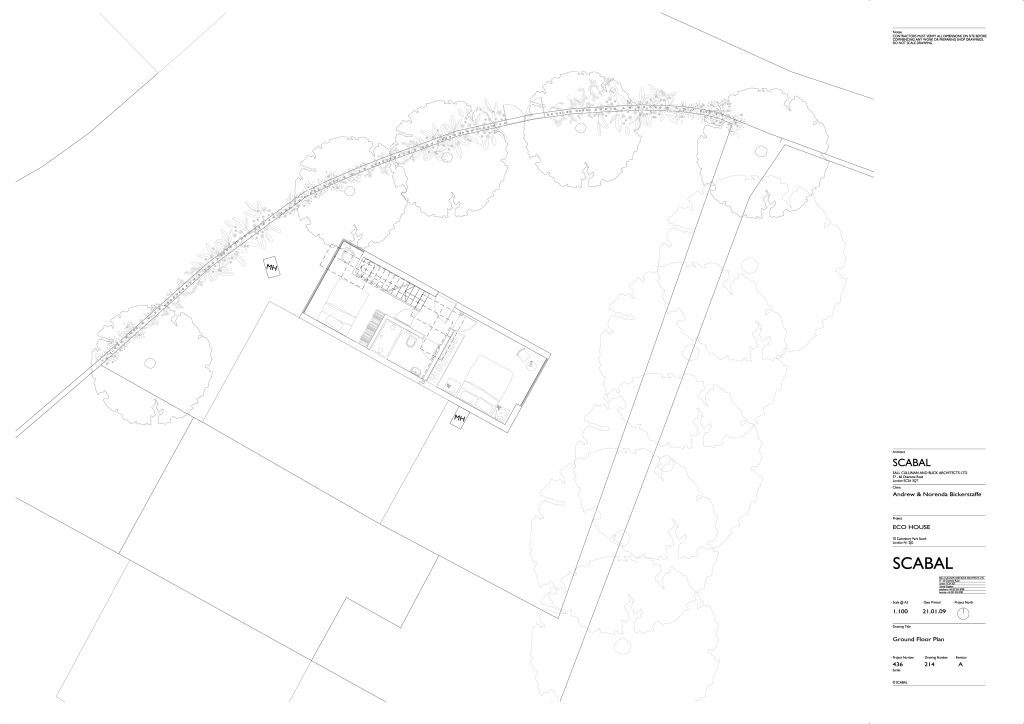 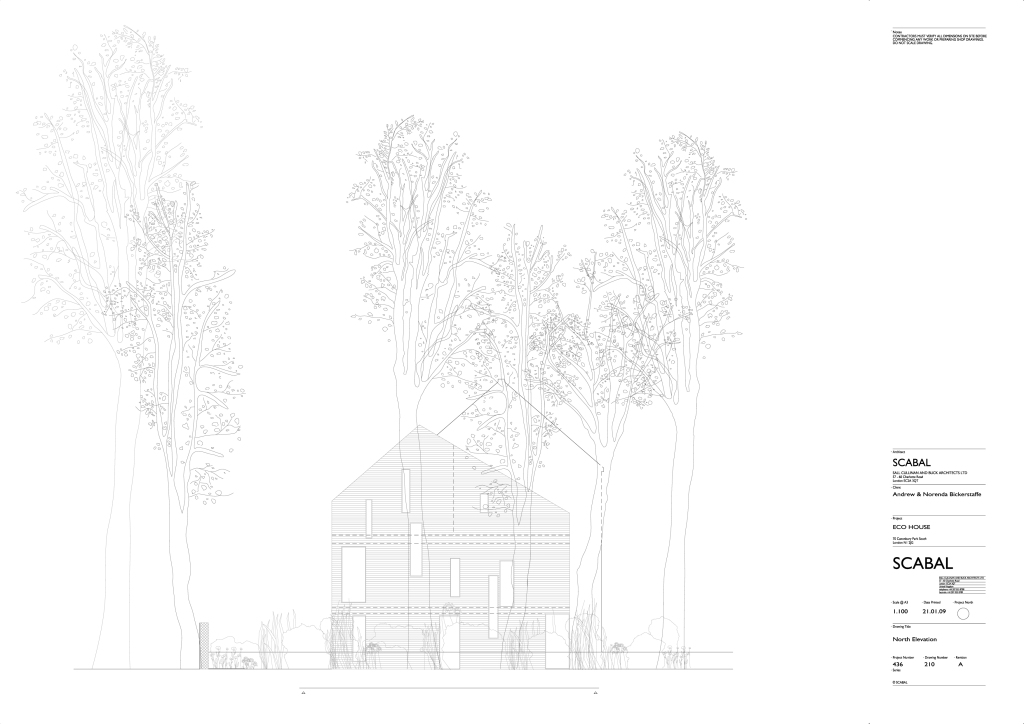